“When the U.S. housing bubble burst more than a decade ago, it brought the global economy to its knees. It turned out that the multiyear housing boom through the early 2000s was hiding skeletons. Homebuyers, driven by a fear of missing out on home price gains, were stretching themselves well beyond their financial means. And zealous lenders were giving out mortgages (or better put, subprime mortgages) to folks who historically wouldn’t have qualified. As that credit rushed in, it helped to drive the housing boom. However, as the housing market corrected, those bad loans created a foreclosure crisis that took many of the nation’s biggest financial firms, like Bank of America and Citigroup, to the brink.”

“At first glance, one might assume the COVID-19 recession dragged down the March 2020 numbers. It didn’t. The ratios created by researchers at Florida Atlantic University were essentially the same in January 2020 as in March 2020. Simply put: March 2020 is a good point of reference.

That said, some regional housing markets could be in full-blown housing bubbles. At the very least, many markets are priced exorbitantly compared to what local income levels can support. That’s what Fortune found after looking at an analysis by the Real Estate Initiative at Florida Atlantic University. Each month, researchers at the university calculate how overpriced or underpriced home prices are in America’s 100 largest housing markets. 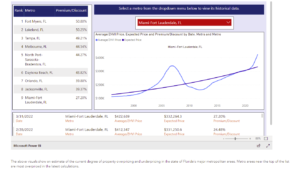 Florida has 8 cities in the top 55 according this study. With Fort Myers and Lakeland leading the charge with 50%. The graph below shows Fort Lauderdale and Miami. The average price and the expected price have been increasing growing apart since the pandemic.

With salaries remaining similar, the housing market overpriced, inflation/mortgage rates rising at a hysterically pace,  how long does this continue until the market “burst”? Seems like only time will tell.

Peter is a South Florida native and has been working in real estate for 3 years. Peter’s favorite part of working in the industry is helping his customers get to the next chapter in their lives. Peter brings all the positivity to Homeinc. He enjoys the fact that Homeinc feels like a family where everyone wants to see each other succeed and share knowledge. A fun fact about Peter is that he was a standout college baseball player. In his free time, Peter enjoys traveling, playing sports and hanging out with family, friends and his golden retriever. We are grateful that Peter chose to join the Homeinc family.